‘He’s lying to you’: why I held that sign up behind Nigel Farage

My frustration came to a head during a European parliament debate over the Trump travel ban. It’s time to call out those who feed on a diet of hate

On 23 June 2016 the UK voted to leave the European Union. On 8 November 2016 Donald Trump won the US general election. Both events were seismic, in and of themselves, but it has been the reaction to them that is the most extraordinary part of the story so far.

From having been the rebel outsider positions in their respective countries, both have now risen to a new kind of status that leads online Twitter eggs gleefully to announce the end of liberal democracy and welcome the impending arrival of a new world order.

Throughout this transformation to a new reality the response from many has been to fall over themselves to demonstrate the levels to which we understand this new direction and – terrifyingly – how we will acquiesce to it. Whether it be House Republicans in the US or government ministers in the UK who campaigned for remain, the idea that immigration and internationalism are the roots of all evil is becoming more and more an accepted fact.

When people speak the truth – that immigration has been massively important in contributing not just to our societies but to the health of our economy and public services – they are immediately dismissed as “metropolitan elites”, people who do not understand the way of the world. This idea is a dangerous misrepresentation.

When you start using lies to construct so-called solutions to the actual problems people face day in and out, you end up building an entire machinery of deceit. And so Trump’s travel ban becomes “defeating terrorism” and Theresa May gets away with pretending we can have a successful Brexit by ending free movement without suffering any loss to our economy.

I’m a Labour Member of the European parliament for the London region, and Labour’s environment and climate change spokesperson in Europe, and there are many wonderful aspects of my job. I get to represent the city and country I love in a place where people from 28 different countries, cultures and political histories meet and share ideas. But one aspect often grates on me: parliamentary procedure.

When debates are time-limited, as they were yesterday, when MEPs debated the US’s new border controls, there is no opportunity to intervene. As leader of the EFDD (Europe of Freedom and Direct Democracy) group in parliament, Nigel Farage gets an automatic free pass to stand up and speak, uninterrupted, for three minutes.

There were many fine and erudite contributions before Farage spoke. The values this place represents do instil a real sense of pride. But some of the comments focused on the need to have a constructive dialogue with Trump, as if he would somehow listen to reasoned and impassioned pleas from MEPs, an organisation he has repeatedly indicated he would want to be destroyed.

Again, I sat there frustrated, feeling that the sheer mendacity of Trump’s justifications for his travel ban were not being challenged.

Time ticked on, and Farage’s speaking time drew nearer. I decided I had to try to do something and, noticing the empty chair behind him, I made a sudden decision to grab a piece of paper and scrawl a simple message on it. It wasn’t particularly sophisticated, nor – as I may find out rather soon – was it particularly parliamentary behaviour (Ukip has written to Antonio Tajani, president of the European parliament, to complain about the incident). But parliamentary rules are often bent by Ukip and other groups on the right and far right, and above all I felt the urgent need to convey my simple message.

No jobs will be created, no industries saved, no community enhanced by scapegoating immigrants for our problems. It’s time to call out those whose diet of hate, division and suspicion will create nothing but misery and poverty. It’s time to stop the nuanced language and call out lies where we see them. 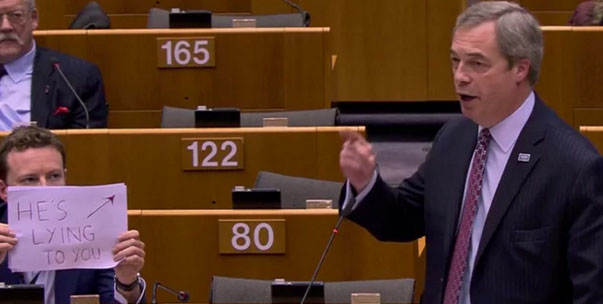 Email this page
2017-03-24
Previous Post: A loaded gun could fire
Next Post: The world needs a leading EU