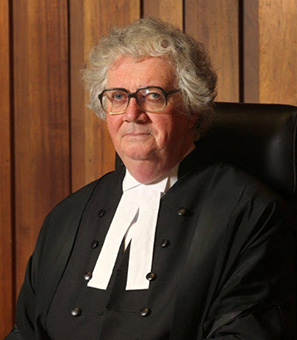 Speech at the Allport Library and Museum of Fine Arts

Delivered by the Hon Alan Blow OAM, Chief Justice of Tasmania, at the Allport Library and Museum of Fine Arts on 20 March 2017

Good afternoon ladies and gentlemen. I would like to begin by paying respect to the traditional and original owners of the land in this area – the Mouheneener people – paying respect to those who have passed before us, and acknowledging today’s aboriginal community.

It is a great pleasure and an honour to have been invited by Emeritus Professor Richard Fotheringham to launch the book that he has edited – The diary of Philip Thomas Smith on board the Royal Admiral en route for Van Diemen’s Land 27 November 1831 – 8 April 1832.

Many people in Hobart are conscious of the Philip Smith Centre on the Domain but I suspect that not many know very much about Philip Smith.  He was an English gentleman who served for a short time in the Royal Navy, left the sea to become an articled clerk in London, completed his articles, practised as an attorney for a time, and then decided to emigrate to Van Diemen’s Land.  The voyage took just under five months, during which he compiled a diary which has now been published for the first time.  It seems he was not short of funds.  He sent £5,000 via the Colonial Agent to invest in the colony and brought three employees with him (as steerage passengers): a general servant, a man to tend his horses, and an engineer to assemble and operate a small steamboat that he brought with him, in a dismantled state.

On arrival in the colony, he was admitted to practice in the Supreme Court of Van Diemen’s Land, but he soon left Hobart to devote his time to farming on land that he acquired near Ross. In his later years he was not only a gentleman farmer, but also a prominent social reformer and philanthropist. He died in France in 1880.  In 1877, before leaving Tasmania for the last time, he invested £1,000 in a trust for the purpose of training teachers. With a further £500 donated by his daughter, the Philip Smith Training College was opened in January 1911.

I first met Richard Fotheringham several years ago.  He and I both attend judges’ conferences.  Richard’s wife is my colleague Justice Roslyn Atkinson from the Supreme Court of Queensland.

Philip Smith penned interesting descriptions of his travelling companions towards the end of the voyage.  He wrote this about the captain:

“He’s a Scotchman every inch of him in all those qualities for which they are generally distinguished: carefulness, economy, temperance, industry & forethought. Is a good seaman & navigator, has plenty of pride & vanity, good natural talents, very ignorant of books & the world, despises grammar & the foolish niceties of singular & plural, vulgar in manners tho fond of quoting Dr Chesterfield, and never more happy than when gnawing a bone after having hacked & hewed & shovelled the contents of his dish in to the plates as if he was helping so many hogs. Has a good nature when it doesn’t interfere with his ‘own or his master’s interest’, is a man of his word. Not more exacting or domineering I dare say than most others, has no notion of the little comforts & elegancies of life in the way of living arrangements & so forth. That is, it’s a matter of perfect indifference to him how dirty the Steward and table cloth is, & how often the cook sends the meat & pudding ½ done to table. Prides himself on his spirit & on his never forgiving an affront & seldom provoking one. In short, the Captain is a good captain as far as his owner is concerned and with a little more experience & and a more liberal master will be as good, perhaps better than most for passengers but all captains are better company ashore than on board.  I believe I’ve said more than he deserves for not a soul on board not even his brother can bear him.”

The manuscript of Philip Smith’s diary is publicly available in the Tasmanian Archive and Heritage Office. In fact it is one of its treasures.

It is clear that the publication of this diary has involved an immense amount of work, in a number of ways. Simply deciphering Philip Smith’s handwriting must have been a very slow and tedious task.  Writing with pen and ink aboard a sailing ship in a rolling sea using an 1830s vocabulary did not make the task of a 21st century editor particularly easy.  Richard has obviously spent a lot of time making sense of words and sentences that are barely legible, but he has also gone to a great deal of trouble thoroughly and carefully annotating the text for the benefit of modern readers.

The result is a publication that provides a very thorough insight into all aspects of long-distance sea travel in the 1830s, as well as entertaining comments about the fellow passengers and the crew.

For example, Smith wrote this at one point about a doctor and a 16 year old girl who was travelling with her older sister:

“The doctor is the constant attendant of the sister without I believe having fully made up his mind on the subject prudently reflecting I suppose that a wife is not indispensable till he has got patients.  She evidently would prefer a man with a larger whiskers & 2 or 3 inches taller but still she’s nothing loath to a seat by his side & to the receipt of cocoa-nut rings and other ingenious dinus which he excels in.”

The ship set sail from Gravesend on 7 November, but had to spend two weeks at anchor off the Isle of Wight because of bad weather, and consequently did not leave England until 27 November.  After that the ship put into only one port before reaching Van Diemen’s Land, on an island named Santiago in the Cape Verde Islands – a Portuguese colony where the ship took on provisions, including oranges priced at two shillings for 100, as compared with threepence each in Covent Garden.

On 4 January the ship crossed the Equator.  Smith described an alarming ceremony with the crew members dressed as King Neptune and various other characters including a barber, a monkey and a bear.  It seems to have been an opportunity for crew members to humiliate and assault those who had not previously crossed the Equator, including all the paying passengers, whatever their station in life.  Smith wrote of such a ceremony on another ship two years previously that resulted in two men being “under the Doctor’s hands for 6 weeks”.

Smith also wrote a great deal about his attempt to transport a number of horses to Van Diemen’s Land. None of his horses survived the bad weather early in the voyage.  He was obviously very troubled by the suffering of the animals for whom he was responsible.

The final pages of the diary contain a commentary about the colony, written about a week after Philip Smith’s arrival.  At the time the only judge here was my predecessor, Sir John Pedder, the first Chief Justice of Van Diemen’s Land.  Another judge, Mr Justice Montagu, the only judge of our Court ever to be sacked, was appointed soon after Smith arrived here.  He wrote this:

“The judge Pedder bears a very good character except for temper & he’s improving that, under the discipline of the officers of his court.  Why a new judge is to be appointed except as a charitable provision for a briefless barrister I don’t know, for I see already there isn’t half business enough for one good workman. The court only sits an hour or two twice or three in a week & generally the trials (for there’s little or no chancery) are of the most trifling description. A libel case is a Godsend. To be sure I’ve seen no criminal business but I heard it’s as trifling as the civil.”

Some things have changed, but not all.  The Court is busier, but there is still very little “chancery” work, and occasional outbreaks of triviality.

One of my favourite passages in the diary concerns a sermon.  Philip Smith was a devout member of the Church of England.  There were no clergy on the ship, but every Sunday a service was held in the cuddy – the room in which the officers and the 14 cabin passengers took their meals.  Published books of sermons by prominent churchmen were carried on the ship.  At each Sunday service, one of the passengers read one of the sermons.  On Sunday, 8 January 1832 Philip Smith made the mistake of choosing a sermon at random and commencing to read it without first investigating its contents. Richard’s research has established that it was a sermon preached by Bishop Samuel Horsley on 22 April 1795 in London at the Magdalen Hospital for Penitent Prostitutes.  He noted in a footnote that the sermon “begins with an exhortation for general self-control then becomes specifically a tirade against sexual lust in both men and women”.

Philip Smith’s diary entry for that day reads as follows:

“Beautiful weather & a fine breeze. Service in the cuddy — the Doctor read prayers & I the sermon. One of Horsley’s, preached at the Magdalene. I pitched on it at random, & not till I got far into it was I aware of its affecting & peculiar character. I was obliged to go on, but the further I got the more particular it became, till at last I was compelled to stop from very confusion & made sickness my plea.  I was asked later whether I preached it for the benefit of the ladies or the gentlemen.”

I hope that I have whetted your appetite.  This is a very interesting little book.  It gives me great pleasure to declare it launched in Tasmania.