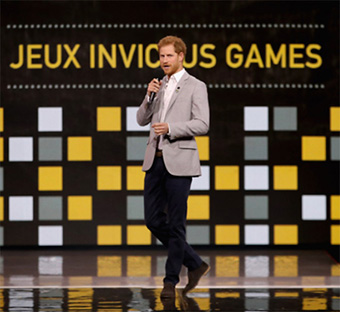 His Royal Highness Prince Harry, The Duke of Sussex

Most of us will never know the full horrors of combat. Many Servicemen and women suffer life-changing injuries, visible or otherwise, whilst serving their country. How do these men and women find the motivation to move on and not be defined by their injuries?

How can they be recognised for their achievements and not given sympathy? Prince Harry asked these questions. On a trip to the Warrior Games in the USA in 2013 he saw how the power of sport could help physically, psychologically and socially. His mind was made up. London would host the inaugural Invictus Games, an international sporting event for wounded, injured and sick Service personnel.

The word ‘Invictus’ means ‘unconquered’. It embodies the fighting spirit of the wounded, injured and sick service personnel and what these tenacious men and women can achieve, post injury. The Games harness the power of sport to inspire recovery, support rehabilitation, and generate a wider understanding and respect for those who serve their country.

Invictus Games competitors are the men and women who have come face-to-face with the reality of making a sacrifice for their country. They are the mothers, fathers, husbands and wives who put their lives on the line and suffered life-changing injuries. These people are the embodiment of everything the Invictus Games stands for. They have been tested and challenged, but they have not been overcome. They have proven they cannot be defeated. They have the willpower to persevere and conquer new heights. The Games shined a spotlight on the sacrifices these men and women made serving their country, and their indefatigable drive to overcome.

The 2014 Invictus Games was about much more than just four days of sport – it captured hearts, challenged minds and changed lives.

Generations have drawn on the words of William Ernest Henley’s poem for strength during times of adversity. Henley was himself an amputee and the poem reflects his long battle with illness. The title means “unconquered” and the 16 short lines of the poem encapsulate the indefatigable human spirit, which is at the heart of the Invictus Games.

Out of the night that covers me,
Black as the Pit from pole to pole,
I thank whatever gods may be
For my unconquerable soul.
In the fell clutch of circumstance
I have not winced nor cried aloud.
Under the bludgeonings of chance
My head is bloody, but unbowed.
Beyond this place of wrath and tears
Looms but the Horror of the shade,
And yet the menace of the years
Finds, and shall find, me unafraid.
It matters not how strait the gate,
How charged with punishments the scroll.
I am the master of my fate:
I am the captain of my soul.

Email this page
2019-01-30
Previous Post: Address at the Gavi Pledging Conference in Berlin, Germany
Next Post: Take a break from driving, try a bus or train