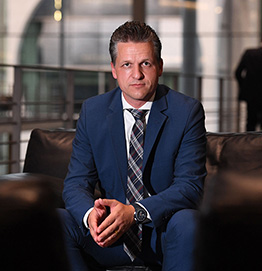 Thorsten Frei, Member of the German Bundestag, CDU/CSU parliamentary group, Committee on Foreign Affairs and the Committee on the Affairs of the European Union

The recent visit by German Foreign Minister Sigmar Gabriel to Israel was a reflection of the relationship between the two countries. On the one hand, our historic responsibility alone has led to close ties with Israel and its people, as clearly expressed by the visit of our Foreign Minister to the Holocaust Remembrance Centre Yad Vashem on the day of Yom HaShoah – the national day of remembrance for the victims of the atrocities of the National Socialists.

During the political rapprochement which has taken place over a period of more than 50 years, this responsibility has evolved into a true friendship and partnership amongst equals. This is due not least to the cultural roots and societal values we share. Israel is an anchor of stability in one of the world’s most fragile regions, which is only a ‘stone’s throw’ away from Europe. The speed with which negative developments in this region impact directly on our lives was clear even before the onset of the refugee crisis in late summer 2015. Israel is a vital partner for us in the defence of our Western values of freedom and our lifestyle – but also in research, development and innovation, as well as on economic issues. The same thing applies to all questions of security policy, where we can today learn a great deal in concrete terms from our Israeli friends, due to their decades of experience in handling a terrorist threat. I was able to see this at first hand particularly clearly during my visit to Israel last year.

Yet Minister Gabriel’s visit, and especially the reasons for the cancellation of his meeting with Prime Minister Netanyahu, demonstrate the tensions in the relationship. This is also ultimately reflected to a certain extent in behaviour towards Israel’s neighbours and efforts to resolve the conflict with the Palestinians. In particular, it applies to the expansion of settlement building by the Israeli authorities in East Jerusalem and the West Bank, which was retrospectively legalised through a law in February. Over the next few months, up to 11,000 new residential units are scheduled to be built. The fact that this settlement construction is further significantly obstructing the resolution of the conflict and has triggered criticism is understandable, especially since it ignores UN Security Council Resolution 2334, adopted last December. I hope that Israel will in the near future again demonstrate greater willingness for dialogue on settlement issues.

Nevertheless, we should not forget that the critical media reporting on Israel is often very one-sided and unjustifiably biased towards the Palestinians – particularly here in Germany. This is clearly reflected in the Security Council resolution on settlement building adopted last December, which only condemns Israel’s settlement policy, making no mention whatsoever of the Palestinian side, which is equally responsible in many ways for the failure of peace efforts so far, due to its action or lack of action.

In actual fact, it is clear that key players from the ranks of the Palestinian Authority, the PLO, Fatah – not to mention Hamas – have been refusing to hold direct talks with the Israeli government for years, or have not honoured their commitments. This applies in the first instance to President Abbas. After all, peace and stability would curtail personal influence and benefits in an opaque network of patronage and power beset by internal tensions and conflicts. Even during phases where Israel imposed a comprehensive moratorium on settlement building, no progress on peace-making was made. And there is a lack of reliable negotiating partners on the Palestinian side. Although the population on both sides of the border would benefit from peace and security, the key Palestinian players in particular have no genuine interest in it.

And the truth is also that the Palestinian side has so far failed to sufficiently distance itself from the use of terrorist means. Instead, all too often in Palestine the political leaders deliberately fuel hatred of Israel and the Jews, in order to prevent peace initiatives from taking root. Hamas, for example, is doing nothing to improve living conditions for people in Gaza. Financial resources are spent entirely on building tunnels, buying weapons and testing the launch of rockets across the Mediterranean. Terror is thus a sad fact of everyday life in Israel. So long as the danger to life and limb is a permanent and real threat, peace will be no more than a vision. Only the lasting rejection of violence on both sides can allow the populations to live in peace side by side – indeed ideally to co-exist.

Unfortunately, we are still miles away from developments of this kind. Instead, a worrying trend towards a new wave of anti-Semitism can be observed, especially here in Germany, of all places. The report presented this week at the German Bundestag by the Independent Panel on anti-Semitism shows that anti-Semitism is experiencing a regrettable renaissance, especially amongst Muslims, and that critical views about the Israeli government often manifest themselves in a broad rejection of Israel and Jews. In the post-truth era in which we live, developments of this kind are fuelled by targeted disinformation campaigns. In this context, I see the Boycott, Divestment and Sanctions (BDS) initiative, an international boycott movement, in a particularly critical light and with considerable concern. BDS calls on people not to buy products from Israeli settlements. It is not only against the background of the recent Jewish Holocaust Remembrance Day that I immediately recall how the greatest crime of humanity also began with similar hate slogans. We must forever keep alive the memory of this in Germany. Such atrocities against the Jewish people must never be repeated. I can thus absolutely understand Israel’s keenness to focus on self-defence, which is often criticised as too harsh.

This brings me back to the here and now between Israel and Palestine. Despite the years of unsuccessful peace and negotiating efforts, it is clear to me that any effort with a chance of achieving a lasting solution is worthwhile. The international community must continue to promote such a solution. Yet it is also clear that both sides must work hard and talk to each other, rather than about each other. And, ultimately, I still see no option other than a two-state solution negotiated between both sides.

Email this page
2018-11-23
Previous Post: Remarks by His Majesty the Emperor at the State Banquet
Next Post: Preventing Medicine – A New Weapon of Mass Destruction