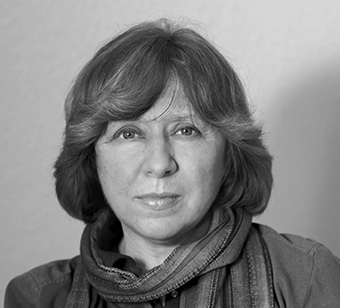 Speech at the Nobel Banquet

Svetlana Alexievich, Recipient of the 2015 Nobel Prize in Literature

I would like to thank the Swedish Academy for this distinguished award, which I dare not claim as mine alone. Rather, I see it as a tribute to the many generations who not so very long ago lived together in a Marxist laboratory of the bright future – that huge country called the U.S.S.R. This award honours their suffering, their pain. They disappeared into obscurity in Stalinist camps, in the mines of Magadan and Vorkuta; they were shot in the back of the head in the torture chambers of the NKVD; and they perished in the Second World War and in other wars the empire fought. The great idea devoured its own children without mercy. Ideas do not experience pain. One feels sorry for people.

During perestroika we dreamed of freedom, but we found ourselves at an entirely different point in history. In the post-Soviet era, instead of freedom, various stripes of autocratic-totalitarianism have flourished: Russian, Belarusian, Kazakh … We are finding our way out from under the debris of the “Red Empire” slowly and tentatively. In my book “Second-Hand Time,” there is a woman whose entire family was exiled to Siberia, and died there. As we sat in her kitchen, she sang this popular Soviet song with tears in her eyes:

As morning tints with colours tender,

Awakens with the dawn …

You are the dearest to my heart.

The past would not release her from its predatory embrace. She had been taught to believe. The little girl, from whom Stalin once took everything, still lived inside her, and she still believed. In what did she believe?

I want to talk about my country – Belarus. Two young women approached me in the Minsk airport when I was on my way to Warsaw. They were crying. Thank you!” they said. “You understand? Now we really exist! Now everyone knows where Belarus is!” I want to convey this ‘thank you’ to all of you. Several generations have grown up since Belarus became independent after the August 1991 coup. Each of them has had its own revolution, has come out onto the Square to demonstrate, and each has wanted to live in a free country. They have all been beaten, sent to prison, driven out of universities, and fired from their jobs. Our revolution has not been victorious, but we do have our own revolutionary heroes.

Freedom is not an instantaneous holiday, as we once dreamed. It is a road. A long road. We know this now.

We all live in the same world. It is called “The Earth.” This world of ours has become uncomfortable. Turn on the television and you will hear announcers gush with excitement as they describe new warships and airplanes … In Russia, in America, and in other countries and languages. A barbaric era is upon us once again. An era of power. Democracy is in retreat. I think back to the’90s …At that time, it seemed to all of us … to you, and to us, that we had entered a safe world. I remember Gorbachev’s dialogue with the Dalai-Lama about the future, the end of history … Today that all seems like a pretty fairytale.  We are witnessing a new clash between good and evil. We are both witnesses and participants.

What can art accomplish? The purpose of art is to accumulate the human within the human being. But when I was in Afghanistan during the Soviet war, and recently, speaking with Donbass refugees in Ukraine, I heard how quickly man sheds culture, and a monster emerges. The beast is revealed. Yet I write … I continue to write … I write as I was taught by my teachers, the Belarusian writers Ales Adamovich and Vasil Bykov, whom I remember today with gratitude …. I write as my Ukrainian grandmother taught me in childhood when she recited poems from Taras Shevchenko’s book Kobzar (The Bard) to me. Why do I write? I have been called a writer of catastrophes, but that isn’t true. I am always looking for words of love. Hate will not save us. Only love. And I have hope …

As I say goodbye to you, I would like the Belarusian language to be heard in this magnificent hall; it is the language of my people.

In one Belarusian village, an old woman bade me farewell with the following words:

“Soon we will go our separate ways. Thank you for listening to me and for conveying my pain to other people. I beg you, as you leave, to have a look at my little cabin not only once, but twice. When a person looks a second time, it is not with the eye of a stranger, it is a look with the heart …”

I want to thank you all for your heart, thank you for hearing our pain. 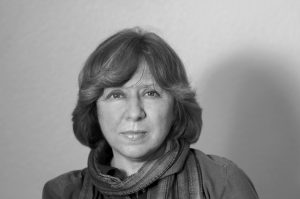 Email this page
2019-01-12
Previous Post: Robotics and artificial intelligence
Next Post: Speech at the Allport Library and Museum of Fine Arts